The National Urban Search & Rescue System was established under the authority of the Federal Emergency Management Agency (FEMA) in 1989. It is a framework for structuring local emergency service personnel into integrated disaster response task forces.

As the threats related to the Cold War began to diminish in the early 1990’s, the Federal Emergency Management Agency (FEMA) transitioned its strategic planning initiatives from those of Civil Defense to concepts similar to those which had begun by USAID-OFDA; domestic mitigation, response, and recovery. When FEMA announced plans to develop a domestic National US&R Response System, Virginia Beach Fire Department was one of the original respondents. Accepted into the domestic system in 1991, the resource was then deemed operational by FEMA. The Task Force is proud to be one of the only 28 domestic resources qualified by FEMA to assist with Homeland Security.

The Virginia Task Force 2 Urban Search & Rescue is a specialized team organized and managed by the Federal Emergency Management Agency (FEMA). The purpose of this specialized team and its highly trained individuals is to assist localities that have been devastated by a catastrophic disaster, natural disaster, terrorist incident, and/or other wise. The team responds with the expertise and experience in handling such emergencies. 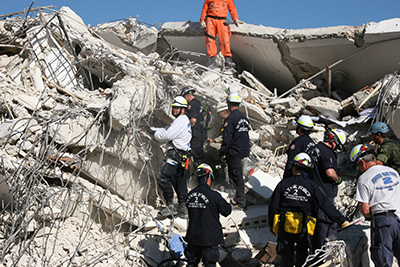 Virginia Task Force 2 is a specialized rescue organization comprised of highly trained Firefighters, EMS Personnel, Dog Handlers, Engineers, and Physicians from various cities and departments throughout the region. The team is made up of a core group of individuals trained specifically to handle such emergencies. More than 210 Firefighters and EMS personnel from various departments throughout Southeastern Virginia, along with many other professionals from specialty fields comprise to make-up this elite team of highly trained professionals.

Virginia Task Force 2, Urban Search & Rescue resource is sponsored by the Virginia Beach Fire Department Virginia Beach, Virginia and is capable of responding to various types of domestic disaster responses throughout the United States of America.

The Task Force (Virginia Task Force 2) has extensive domestic disaster response experience in a variety of mission assignments, such as Terrorist Attacks, Hurricanes, etc. It’s also recognized throughout the United States, as one of the premier leaders in the provisions of training in catastrophic event mitigation, readiness, and response and victim recovery techniques. It also sponsors an Annual Structural Collapse Technician School in order to provide and prepare US&R personnel with the skills associated in handling these types mission assignments. 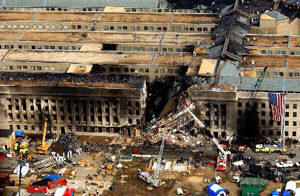 The Department realizes the importance of supporting the Task Force and its personnel in their mission of delivering valuable resources to localities effected by such disasters. During the deployment of the Task Force, highly trained personnel are readily available to provide assessment evaluations, planning, mitigation, and victim recovery during any deployment mission. The various departments support these efforts through the continuous training of Task Force personnel in the various components utilized to effectively operate during the teams assigned missions. Virginia Task Force 2 can be deployed by FEMA to any National Emergency or Disaster at anytime throughout the year.

In total, there are more than 200 highly trained and readily equipped members on the Task Force eager to respond at a moments notice. When activated, the Task Force is comprised of 80 personnel that consists of firefighters and paramedics from various departments throughout the region (both career and volunteer) and highly trained civilians including physicians, canine handlers, structural engineers, communications experts, and heavy rigging specialists. When activated by FEMA, all related expenses are fully reimbursed by either, resulting in no cost to the citizens of these localities.

Task Force members are required to attend functional training throughout the year in order to maintain their skills, often without compensation. The members agree that this is a small personal cost and well-worth the investment of being a partner of this elite and talented response resource. The Task Force conducts annual full team exercises, both consisting of classroom and practical intervention each year. Task Force members are also required to complete mandatory annual maintenance validation check-ups. 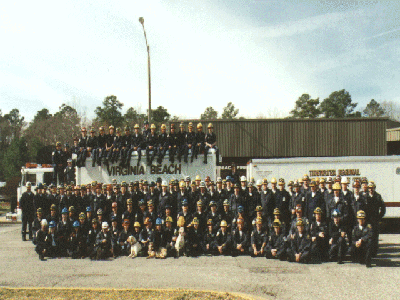 The Task Force realizes that it takes many partnerships to ensure a successful venture. It speaks often of its relationship with FEMA, as well as its evolving initiatives and networking with other Task Forces. The members fully realize that the most important partnerships are with their families and their co-workers. Deployed without warning, often in the dark of night, the members need to be ensured that they and their family members can accept the restrictions of a 14-day mission, often without communications to the home front. The members also realize the importance of their co-workers, who will be required to work extra shifts while the Task Force is away. The Task Force could not be successful without this strong support and assistance of their jurisdictions.

During recent years, the members of VATF-2 and their families would come face-to-face realizing just how important these relationships with one another and their jurisdictions. For the first time in the history of the inception of the task force, members would find themselves being deployed internationally to Port-Au-Prince, Haiti in response to a devastating 7.1 earthquake, which demolished most of this countries infrastructure. This deployment would soon present a new challenge for all of those involved, anticipating and not knowing what lied ahead of them. Being deployed to a third world country certainly presented new challenges for the team and those on the deployment, but nothing that these experienced and well trained task force members weren’t already prepared for.

VATF-2 has been exposed to many different environments throughout its inception and welcomes all deployments with open arms. All task force members are operationally ready and willing to acknowledge their mission assignments as directed by FEMA’s operational center.